The vision for the ESV (English Standard Version)  Bible began in the early 1990s as many evangelical Christian leaders saw a need for a new “word-for-word” Bible translation—one that would be characterized by precision and literary excellence, in the classic stream of the Tyndale New Testament and the King James Version Bible.

The ESV was created by a sixty-member team of the finest evangelical Bible scholars from around the world, with additional review and input provided by the sixty-member ESV Advisory Council. A twelve-member Translation Oversight Committee, with Dr. J. I. Packer as the General Editor, carried out the overall work of revision, review, and final approval.

In the years since its initial publication, the ESV has become the translation choice for many churches, denominations, ministries, and families around the world. It is one of the fastest growing English translations and continues to be published in new editions both in the United States and internationally.

The fall of 2008 marked the next significant step in the development of the ESV with the publication of the ESV Study Bible. Created by a team of ninety-five evangelical Bible scholars and teachers, the Study Bible includes twenty thousand notes and two million words in over 2,700 pages. It became a bestselling Bible and was the first Bible to be named the “Christian Book of the Year” by the ECPA.

ESV in Comparison to Other Translations please click on the following: Verse translations ESV 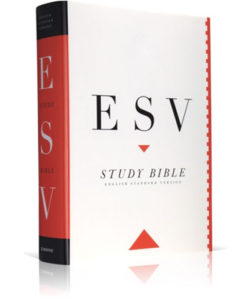